Seems there’s really no accurate information out there for this little thing. A good summary would be though ‘a bit crap’…..if you compare it to all the others available, every website suggests this is the lowest possible spec in its size. Maybe time for an upgrade 😛

It’s been fun getting back to my old routine and hitting up teh interwebs.

There’s a huge amount of resources out there

A few that I’ve discovered so far

And there’s quite a bit else out there too, I’ll try to keep this page up to date as I go along,

There does seem to be quite a few different versions of this machine out there though, most look superficially similar, I’ll try to figure out what the differences are

From the Auction, Specifications are as listed below. Certainly does seem quite impressive for the money.

Even more so considering I saved nearly $100 off the price! 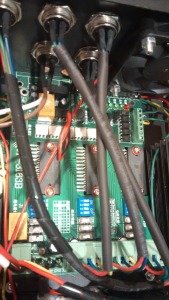 It’s now the weekend, If I can’t have fun playing with the CNC, driving it electornicially in the manner it’s intended, I’ll have fun with the screwdriver instead.

Some things of note

The Stepper motor driver board is labelled JP3163-B, uses Toshiba TB6560AHQ drivers. Looks like it’s only a 3 channel board

There’s a smaller stepper driver board on the side labelled JP-1635A. This looks like it’s fulfilling the 4th Axis role. it’s probably not on the main PCB as most of these devices will only ever be sold as 3 Axis….why spend the extra few dollars on un-used components.

More unboxing. This time the power supply, another three of those 57HD0401-15SB steppers. two have large adaptor things on them, one has a smaller – must be the X,Y axis and the Z axis

Layed out nicely on the dining room table

I did get quite excited now, thought I’d be CNC’ing on the weekend IF the power supply was 240V as ordered. Well, it is. However, I did see a somewhat ominous DB25 style connector, a parallel port. That’s something that i’ve not seen on a computer for a while. annoyingly, none of  the computers I own (don’t ask) seem have the pre-requisite hardware to drive this thing.

A quick Google suggests that it’s not gonna be that easy and more hardware’ll be required.

Ah well, a cute little case full of Screws, bits and tools is always good for a cheer up

Tad gutted at the 110v issue, however, lets keep going regardless. I’m liking the new CNC smell too much

These Guys sure wrap their stuff well, Plenty of foam

And, Brilliant. Never have seen a 110v inverter with a pointy, handley thing on it before

I’ll list all the parts I come accross another time

Pulled out the smallest box to start with, this is exciting

However, something a little ‘odd’ here, I’d ordered a 240V version of the CNC, could it be possible they’ve sent some other voltage?

Aaw, crap, this means I’m probably not going to be able to ‘play’ on the weekend

For those thinking of having one of these delivered….

I’m rather impressed really, Twenty Five Kilograms rolled up  to the front door on Thursday. Just four days after purchasing…..

I Purchased this CNC from An eBay 3020T CNC seller late one late night,

it was the 15th June and the chaps at Ozbargain had become aware of a fantastic 20% flat discount off anything purchased from eBay offer.

Turned out that eBay had goofed somehow and globally enabled a discount code only intended to be released to select individuals back home in Blighty.

That discount code tipped me over the edge. I frantically rummaged around for my credit card details, my forgotten paypal account’s password and perused the behemoth auction site for something, anything, a bargain to acquire. I simply MUST save money (ironically by spending money)

I’ve always liked the thought of making stuff, have been ‘making’ vicariously through various websites over the years, finding little time to end the procrastination and actually, physically do something. This CNC, this 3020T I believe will allow me to grasp within my grubby mitts the ability to turn some lovingly crafted and digitally stored squiggly patterns, three dimensional wotzits, any old crap really. It’ll allow me to turn digital crap into actual, physical, holdy in your handy, crap.

Yep, that’s right, I’ll effectively be procrastinating no further, no longer filling hard drives with even more ones and zeros. This CNC, it’s an enabler, I’ll be contributing physically to the amount of detritus in my abode by converting those digitally stored files into three dimensional junk that I can store all over the house, thoroughly annoying the missus even more!

Purchased one of those Chinese CNC machines the other day. One of the smaller machines, known as a 3020

My model happens to be the 3020T, and just for fun I decided to puchase the 4 Axis version.